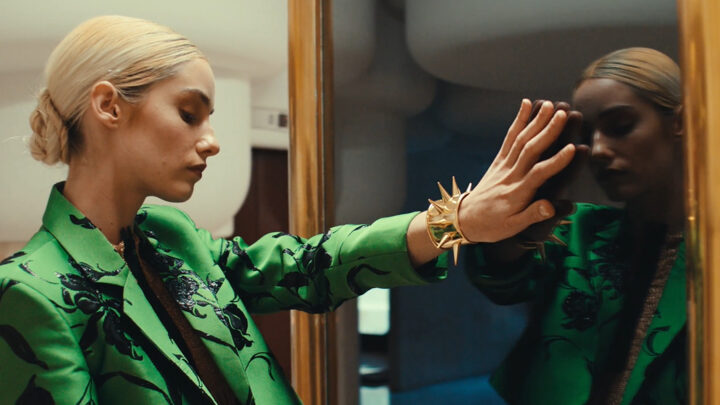 What does beauty mean in modern times?

We have the freedom and creativity to become whoever we want, but the cost is the constant conflict over our choice to transform into anything – or anyone.

This was the avenue that writer and director Nina Aaldering decided to explore with her short film ‘Torres Blancas’, named after the Torres Blancas building in Madrid. Unusual, organic and infinitely creative, the tower is the perfect representation of the entrancing fashion-centric short film.

The film follows the story of three women who just bought a new appearance at an exclusive boutique in Madrid that sells faces (yes, really). In today’s world, there is nothing that can stop you from changing yourself entirely; a new face, extravagant clothes, unbounded creativity. The film explores this concept while the models lose themselves in the mirror in a mind-bending closing sequence that leaves you itching for answers.

The film is a visual feast exploring beauty, fashion and architecture, so it needed to sound just as good. The challenge was to create a soundtrack that could reflect both the mysterious uneasiness of the message as well as the fashionable artistry at once. It has to feel modern yet approachable, intense yet spacey, hopeful yet dark.

Furthermore, as a film with the aesthetics at the heart of the piece but no dialogues except for a few clips, the music had to play a central role in forming the final product.

The initial pitch was to have a techno-style soundtrack: rough and gritty, yet simultaneously romantic, like a basement rave with love in the air.

After vibing to some of the best electronica and taking in the dystopian nature of the pictures, we decided to enhance the unsettling nature and uncomfortable feeling of the film. We rolled up our sleeves and started producing an ominous textured soundscape. It organically moves across the track but is chopped in an unnaturally rigid fashion.

By contrasting the visual with audio and distinguishing elements to match the theme, the film began to speak louder than ever.

The final result is a perfect blend of all the contradicting elements that make the film stand out. The soundtrack starts off with a distinguished string run, giving the track an eerie flair that feels mysterious and haunted from the start.The introduction of handclaps accentuates the overall mood of the track, while alluding to flamenco.

The dark electronic swells adds a unique abrasiveness as well as an important contemporary element to the composition. Meanwhile, the Spanish guitar and fast-paced clapping root it into its local culture and keep it authentic.

Fun fact – even the voiceover you hear is 100% massive. It was done by our former Senior Project Manager at MassiveMusic Berlin, Aldana Pagani, who stepped in as a telephone operator.

To quote Director Nina Aaldering: “The music made this film come alive. The pictures were good, but it needed the music to get it where it’s now. The music tells a story here. Every time I watch the film, I still feel a bit uncomfortable. The Spanish guitar contrasts this upsetting feeling, making it more human and real. Just the combination we needed”.

Beauty is in the eye of the beholder, so where do the limits lie when the creative potential is limitless?

Still curious about what went into making this jaw-dropping short film? Read our interview with Director Nina Aaldering on LBB.