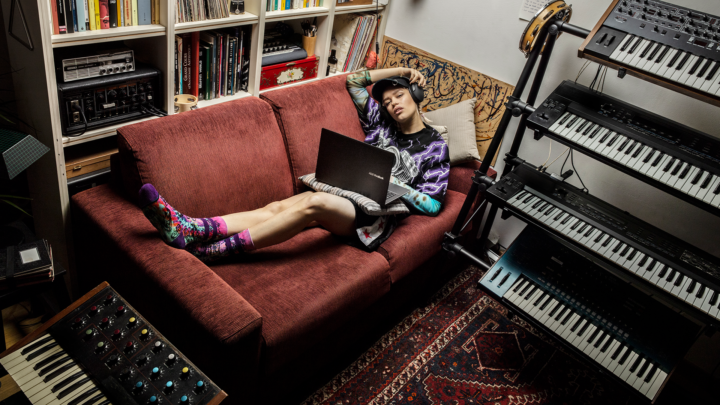 Millennials who? Now it’s all about Gen Z, people born from 1995 to 2010. The true digital natives, the ones who are currently looking for their place in the world.

ASUS, which has always combined cutting-edge design and intelligent solutions, knows that and, for the launch of its new VivoBook laptop, aims to reach them by telling the stories of four different young, eclectic and brave pioneers of creativity.

We at MassiveMusic were asked to collaborate with a young emerging artist to create an energetic and contemporary track. The biggest challenge? To make sure the track was ready before the shoot started, as actual lyrics from the song were used for the spot itself.

We teamed up with GODI J to write, compose and produce a song that fits with the message of the campaign.

The film stars Guoda Jukneviciute, aka GODI J (songwriter and musician), Giammarco Nocco, known as Gene (AR creator), Desola Oki (professional athlete) and Michael Cutini (footwear designer). Their role in the story is not the result of any fiction, but the expression of their true personality.

Job Poels, Senior Music Producer at MassiveMusic, comments on the process: “We purposely kept a few recordings raw and unprocessed to reflect the message that ASUS wants to convey with this campaign – be real, be creative and, above all, be yourself.”

The result is an anthemic soundtrack that wows the world and speaks to Gen Z because it reflects their taste, vibe and intentions.

Thanks to the collaboration, we fuelled the creative exploration that ASUS needed while allowing GODI J to gain exposure, in line with our artist partnership mission. But, most importantly, we feel super young again. *Ok, boomer*