by Leah Devine and Ilaria Mangiardi 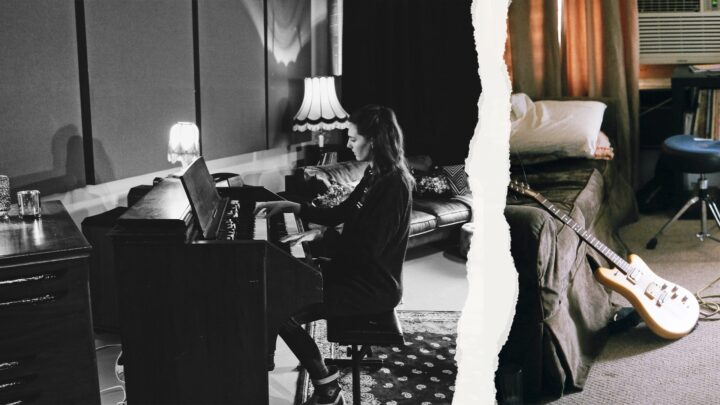 Women in Music is a MassiveMusic series, which celebrates and empowers women who are leading the way, creating equal opportunity and encouraging other women to pursue a career in music.

Music is often described as a universal language, something we can all understand and appreciate together or alone. But, behind the scenes (and backstage), women are still being discouraged, underestimated and overlooked.

True, things are slowly changing (e.g. the conversations about gender inequality at music festivals) but ‘slowly’ is an adverb we can no longer use.

As for me (Leah), being brought up by a woman who left home at 16, shaved her head and squatted above a pub in Liverpool, I’ve only ever known strength, courage and pure determination. She initiated my love for music, and I couldn’t be more grateful. Fast forward to this brand new decade, I find myself sitting amongst colleagues who share the same values and passion for music. International Women’s Day 2020 campaign theme is #EachforEqual, so here I am, grabbing this opportunity by the (industry’s) balls. I reached out to some tenacious women who are kicking patriarchy’s ass to talk about their dreams and fears, and to ask them:

How can we be more present? What needs to change?

Tell us about your relationship with music: where did it all begin and where is it now?

CECE: My relationship began with country music. It has always told these intense stories, never disguising life’s truth which, as a teen, I related to. After all, we all had our ‘angst’ period and I wanted to swim in it. I got so much joy from the darkness.

Songs like Dolly Parton’s ‘Down from Dover’ and ‘The Bridge’ are incredibly dark and progressive to release as a woman in the late 60s/early 70s. Then you have songs like ‘Waiting Around to Die’ by Townes Van Zandt. The darkest title ever.

My relationship with music is now in a place where I am strongly focused on lyrics. I think even more so than the melodies and production. If I can’t hear the story and I can’t connect to the lyrics, then I don’t engage in the same way with the music. As a consequence, I also try to implement the importance of lyrics in my own songs.

MILOU: My relationship with music goes way back. I grew up in the recording studios of my parents: my dad was a producer and sound engineer, my mum the studio manager. Me and my three brothers always hung out in the studios. We would sit and listen for hours, sometimes we even got the chance to play with the musicians there. I’ve been extremely lucky to meet some cool artists, such as Eddie Floyd. I even jammed with Bob Weston, an old guitarist of Fleetwood Mac.

When I was about 7, I started with piano lessons and I absolutely adored playing, still do! Later, my dad also gave me guitar lessons, but I’m very rusty at the moment. I do write my own music, but more as therapy and for fun.

MILOU: Co-founding and being part of the team at the Abbey Road Institute in Amsterdam has been one hell of an adventure. We have built everything ourselves, started this thing from nothing. It really feels like our baby.

It must be such a special space for both the employees and the students.

MILOU: Indeed. Every day I’m surrounded by like-minded people. Everyone is there for the same reason: music. It’s a small, ‘boutique’ school, so everybody knows each other on a personal level. We’re like one big family. Students come from all over the world, they bring their stories, styles and genres. The diversity and acceptance of every student makes it a very open-minded environment. I love that I love my job. It’s a bloody honour being a part of it all.

MILOU: That’s such a great initiative! I bet it sounds like a paradox that music itself can help people feel better when creative people are often the ones who struggle with mental health issues. I see lots of students and professionals, both male and female, struggling under the same pressures and notice that many have the so-called ‘imposter syndrome’. I try to guide them by sharing my own experiences and struggles: they must know they’re not alone. Hopefully, we can make a positive change if we all keep talking about it and break through the current system.

Do you ever feel waves of fear or doubt?

MAX: I have a loving and supportive family and a dear group of friends, so when in doubt, I turn to them. I think it’s good to really protect your life outside of the music industry. We are all so passionate about our work and before you know you are on the job 24/7. I also never skip working out, I love to run and I do pilates. I think a healthy body really helps to keep up with everything.

MILOU: The ‘imposter syndrome’ affects me as well, so I can definitely relate. Especially when you feel that people aren’t taking you seriously, because, in my case, I’m a young woman in a macho industry. Yet, that also gives me the element of surprise when they find out what my experience and position is.

The biggest challenge you’ve faced in your musical career?

CECE: The one I’m currently facing. I have always been in bands which resulted in a constant input and flow of ideas for writing, rehearsing, shows. Now I’m trying to do the solo thing. I have to pump myself up to start writing and I become the toughest critic. So I don’t write as many songs as I used to. The challenge is to get myself into that creative space again where I can trust that what I write doesn’t have to be a hit. Each song deserves to be written, whether good or bad.

What would you say to 18-year-old you?

MAX: I would tell her to stop plucking her eyebrows immediately and that the boy she thinks she can’t live without, she can definitely live without. Besides that, I don’t think I would have done a whole lot differently. I got kids at a fairly young age. I first got pregnant at 27 and never regretted that. I had to make some sacrifices but in the end it all got me closer to my goal. I don’t think having kids is bad for your career at all, it just makes you much more efficient. I’m very happy.

Approximately only 2% of music producers are female. How come?

MILOU: There are a few factors. I’ve noticed women are too humble. I think there are more female producers and sound engineers than we initially know. They just don’t profile themselves like that. That said, a lot of girls and women have been discouraged to pursue a career in production and sound engineering. Maybe not discouraged, simply not encouraged. People used to tell me “You don’t have to do and know all of this, there are professional guys who will do this for you”. It took me some time and courage to say “But I want to do and know all of this myself.”

The technical side might be scary, but don’t let anyone take away a learning moment from you! It doesn’t have to be a 50-50 divided industry. It’s about creating equal opportunities for everybody. Let’s break down the stereotypes. *amen sister*

MAX: Unfortunately, it doesn’t only affect producers. There is a general underrepresentation of women in the music industry. People tend to hire people they can identify themselves with. Men have a network of men and hire men. This is not only gender-based. Race plays a role too. We are getting there though. Kim Bloem, for example, is now Head Promoter of Mojo Concerts, a former old guys’ network. She makes sure women are treated equally. It’s important that women pursue top positions: they have the power to make a change for the rest of us.

What songs or albums have motivated you to go out and get sh*t done?

CECE: One of the most influential albums for me is ‘Stories from the City, Stories from the Sea’ by PJ Harvey. Each song pretty much consists of the same 4 chords. Yet, each has this new enigmatic power, structure and deep sexy lyrics. As a young musician, I was compelled by this masterpiece of an album, with such simplicity on guitar. To me, this is still her best album to date.

More recently it’s Anna Calvi’s ‘Hunter’ album. It’s challenging and aggressive but also delicate in its power. It makes me want to pedal home faster on my bike so I get back and let it rip on my Fender mustang. The neighbours love me.

MILOU: ‘Go Your Own Way’ by none other than the legendary Fleetwood Mac (love them), ‘Immigrant Song’ by Led Zeppelin and ‘Reaper’ by Sia.

Any women out there that you would like to acknowledge for being an inspiration?

CECE: Linda Perry. Songwriter, producer almighty. She has the most incredible, open, broad and authentic view on music as a whole and the industry. She doesn’t limit herself to anything or anyone. But also, Kate Bush. She’s a weird and wonderful human with an incredible ear for progressive productions.

MILOU: Darcy Proper. She is a renowned and Grammy-winning mastering engineer who is going to do the mastering of our EP ‘The Wendelmoet Sessions’. She is an incredible professional and wonderful human being. She always reminds me to see the positive side of being a woman in a male-dominated industry: you stand out. So, stay true to yourself. Pretending to be something you’re not will only drain the energy from doing what you love. Own it.