An Interview with Emmanuel Adjei

An Interview with Emmanuel Adjei 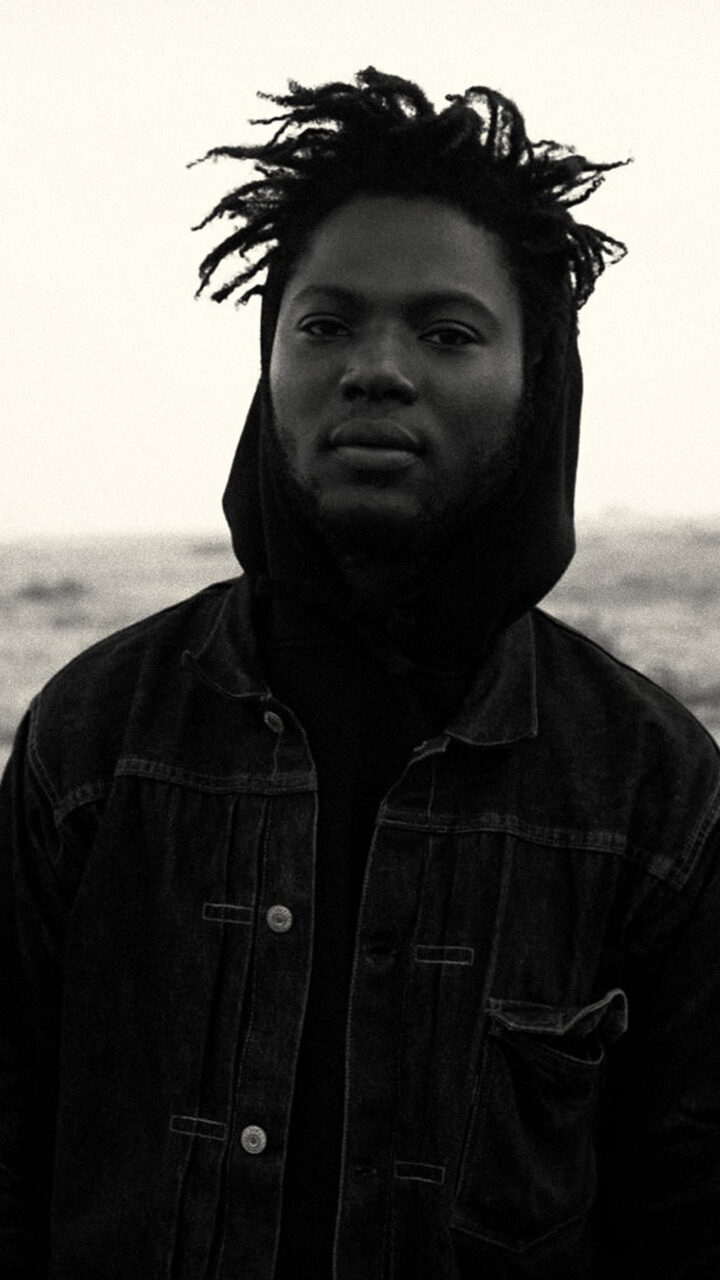 Emmanuel Adjei is a Dutch Ghanaian visual artist and film director at Halal. With a background in Fine Arts and a primary interest in storytelling, Emmanuel’s work deals with human narratives, captured by his unique multi-layered visual language. Creating atmospheric worlds in both a painterly and cinematic style, Emmanuel always seeks to challenge the boundaries between fiction and reality.

I fell into the trap – and no, I am not talking about the music genre. For a second I succumbed to the stereotype that if you worked with Sevdaliza and Madonna, you’re probably a self-centred director who only brags about himself.

Well, my conversation with Emmanuel Adjei couldn’t have been any more different than that. In the hour we spent together, it was as if I was talking to a friend. Someone humble and interesting because he’s genuinely interested in what you’re asking. I was the one interrupting to tell him: “Man, this is incredible.”

We had him over in 2018 for our Music x Film Craft event in collaboration with ADCN. But, you know, with some people one conversation is not enough.

A dreamer. I would also like to add I have a strong personality but I guess it’s not up to me to say that. I hope it shows through the work I deliver. It might seem ambiguous and evasive to some, but my way of thinking is very specific.

Have you always wanted to become a director?

I got introduced to theatre and fine arts during high school. I remember I was so fascinated by the Dutch masters that I thought I was going to be a painter. Then I went to art school and I thought I wanted to become an actor but, while studying, I developed a fascination for experimental films, hybrid forms of audiovisual art and narrative strategies. So I got accepted into film school and eventually found out directing was what I wanted to pursue. Yet I like to call myself a ‘fine artist’.

Film is the medium I prefer because it asks for a healthy marriage between vision and art. Plus, I love working with people, something required in this industry. It’s only when I collaborate that I really learn to appreciate the creative process.

You have a very distinct visual and narrative style. Where does your love for storytelling come from?

My upbringing and cultural background have influenced me a lot in how I see the world around – and within – me. I was really into African cinema when I was a kid, mainly sci-fi and soap. This bigger-than-life vibe mixed with spirituality and politics, very similar to Hollywood by the way, was really intriguing to me.

I’ve been using my personal background as a sort of library, or a museum if you prefer, which is funny because it’s like being the curator of my own references. So every time I have to work on a project, I tap into that library. Most of the time it’s not a linear A-Z narrative but more of a collection of thoughts. And when it comes to collecting, the trick is to simply surrender. At some point, you’ll have that eureka moment. Most likely while you’re washing dishes or taking a shower.

Do you leave room for improvisation?

Always. Serendipity is a strong component. I allow it to influence the creative process because it gives and breathes life into the project, it makes it unique. Could be that you started working on a project, let’s say a few months ago, but life happens in the meantime. The chance it will change your original idea is quite high.

Earlier this year you directed not one but two music videos for Madonna. I mean, is there anything cooler?

Her team reached out to me. It was so surreal. The process was a lot of fun yet challenging at the same time. She knows what she wants, so I had to stay flexible with every detail: script, shoot, edits. She invited me to her house to listen to the preview of ‘Madame X’ and asked me to pick two songs out of it. Crazy stuff, sometimes I have to pinch myself. I probably picked two of the most experimental tracks of the album and started working on both videos right after.

The first one was ‘Dark Ballet’.

Correct. And it was love at first sight. It’s an insane track. We wanted to bring the story of Joan of Arc to life. She told me she was thinking of having Mykki Blanco in one of her videos, so I came up with the idea to connect him to the video for ‘Dark Ballet’. She thought it was such a great idea because, in a way, Mykki Blanco is one of our modern-day Joans of Arc.

“I’m gonna call him right now”, she said and she did.

‘Batuka’ had that special something that caught my attention. It was so powerful to listen to her voice blending with the voices of other women. Its core is based on a simple ‘call and reaction’ dynamic, which was already enough to capture from a visual perspective. She really cared about the women that you see on the screen. It was all very natural. I feel so honoured to have had the privilege to work with someone who has paved the way for so many others.

Masks, duality and the shaping process of our identity. A recurring theme in your work. What is the most difficult mask to wear?

The mask that has been given to us when we were born. It’s the most challenging and the easiest at the same time. It’s your face, your skin. It tells a lot about how we deal with our inner and outer world. It changes shape every day. You have to nurture it physically, mentally and spiritually – making art and being creative is one of the many ways. We live in an era where it’s all about masks and the effect a certain mask has. You can get plastic surgery and change it, but I think that your true self, the one that is underneath your skin, will always show.

I remember once I was working on a project. I really wanted to make it work, so I put all my energy into the concept stage but then I had to wait for a long time before the final go. I was so tense and anxious that I didn’t sleep, I didn’t eat properly and eventually got a mental breakdown. If you looked at me in the face you would have guessed it without me telling you what I was experiencing.

I feel you. Did it go through?

No, they cancelled it in the end. On a spiritual level, I think it was more about me being afraid I would lose the job, not getting the recognition. An ego thing. Truth is, you can’t control how people think. If the universe wants you to do it, you will.

‘Shahmaran’ by Sevdaliza. Afropunk described it as a ‘Spielberg-level sci-fi short film’. Can you guide us through the creative process?

I reached out to her years ago, we were at a concert and started chatting. This was four years before ‘Shahmaran’ got released. I still remember listening to the very first version of the song – it had a different title, a different core melody and lyrics. The creative idea has its foundation in the song itself. It refers to the Greek notion of Hieros Gamos or ‘holy marriage’. And, funny enough, it really turned out to be a marriage of music and visuals. It’s the story of our aspirations of power and success, our addiction to materialism and the false sense of freedom we often get out of it. It comes down to the eternal fascination and desire of the human mind.

I think your world and her world are made for each other.

She’s such a visionary: when she makes music she visualises it, so that definitely allows us to be on the same wavelength. We inspire and respect each other a lot. She’s very busy but we always keep each other in mind, something quite uncommon in an industry made of transient friendships.

Do you still remember your very first approach with music?

I used to play the piano when I was a kid, so I would say since the very beginning. During my teenage years, I listened to a lot of Dutch hip-hop rappers and started experimenting and making music with my circle of friends. Oh and Michael Jackson. My parents listened to him all the time.

Can you see your finished product before you start?

Because I prefer storyboards over moodboards, most of the times the final result is very close to the initial treatment. Of course there are always production changes along the way but again, if that happens it’s most likely because of serendipity.

You directed commercials for Hugo Boss, Patta, Asics. Is there any of these where music played a big role?

Definitely the one for Hugo Boss. During the process, the musician I worked with found out he was deaf from one ear – he could only use 10%. That, of course, influenced the sound of his own composition as his perception of the sound was different. It was really emotional.

In general, I think that music needs to feel organic, a soundscape that flows from one frame to the other. Luckily, I’ve always had the freedom to have a say in what the music for the commercial should be. It’s such an important component: I always see it going hand in hand with the visuals, never as two separate streams.

Do you always experience sound from a cinematic perspective?

I focus on the effect it has on my body, on the specific state it puts me in. From that emotion, I start thinking of a concept. You could say it’s quite similar to ASMR. I need to be in a certain state. It’s a sort of physical emotion.

If there was a trailer that talked about The Magical Life of Emmanuel Adjei, what soundtrack would you choose?

I love choirs, hearing all the different harmonies, so I’d include that in the composition. If I had to license a track, I’d probably go with the soundtrack Cliff Martinez wrote for ‘Solaris’. It has chimes, percussions and strings. You can’t tell where the sound comes from; it’s as if there’s no beginning nor ending. Back to what we were saying about my background, I like to think I’m an in-between.

What are you listening to at the moment?

Radiohead, afrobeat, techno. I recently discovered this 14-year-old rapper on Instagram whose name is Ray Emmanuel. Despite his age, everything about him screams ‘old soul’: the way he writes his own lyrics, the way he delivers them.

What does the future hold?

Who knows. Maybe a feature film, maybe not. I’d rather not say it out loud. I want to be surprised. By myself and life itself.